One more citrus, where am I going to put it?

Another citrus I just couldn't resist lately is the Australian Finger Lime, Citrus austalisica. I'd never heard of it until this fall when we brought some 5-gal Four Winds Citrus into the nursery to sell. They had the oddest little sausage-shaped fruits and instantly I was intrigued. 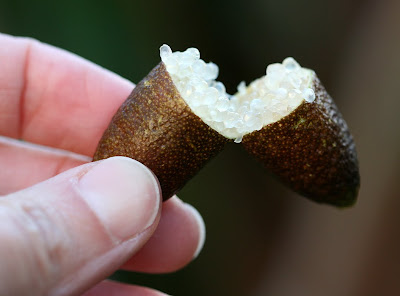 Cutting one open allows the little caviar-like beads to ooze out. They have a firm texture and don't easily pop. Bite down on them for a burst of tart citrus. Not sweet, but not mouth puckering either. They seem like they'd be great as a garnish, even though according to the internets most people make marmalade out of them. I thought they would be pretty and sparkly on top of a cupcake. I just happened to have some pineapple cupcakes with cream cheese frosting I'd just made so I tried a few on top. Unfortunately the flavor was lost. I think if you don't directly bite down on the beads you don't get any of the flavor. Does that mean I was scarfing down my cupcakes? Probably. Later I tried some of the beads in a salad. I mixed them into the dressing and drizzled them on top and that worked pretty well to get the full citrus effect. More chewing with salads I guess. I suppose you could crush them and use the juice for something but I think one of the best features of this citrus is the texture of the beads. Entertainment for the tongue. Although I'm sure the juice has many potential cocktail uses. 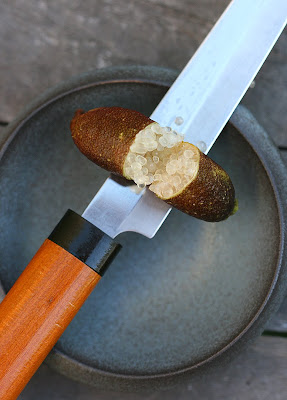 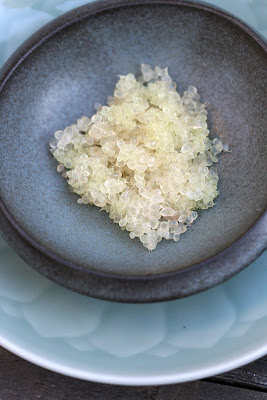 Getting this "citrus caviar" out out of the peel can be a bit tedious though. The best method I've found so far is to squeeze the cut-open fruit like a tube of toothpaste. Don't worry about popping them. As I said, they are pretty tough. Scrape the sticky beads out with a knife.

The plant has tiny little leaves and profuse thorns, probably would make a good barrier plant. Native to Australia, it grows to about 10-12' tall. So far no frost damage in my zone 9b garden. The fruit is variable in color. The skin ranges from green to black and the pulp tends to be clear, green or pink. I ended up with a brown-rinded, clear pulped one. Not the most exciting, I'd love to get one that has pink pulp. Maybe not the most useful citrus for cooking but fun to have for the novelty factor. One of those "look what I have and you don't" plants. Nanny-nanny-boo-boo.
Posted by Floradora at 4:20 PM